It's late and Rico prepares to make his ride back to Starkbrunn. Fenneke and Ysabel will stay behind with the Master of the Chamber as Rico goes to fetch reinforcements for the stronghold.

Rico rides through the night, pushing his steed onward and swinging with his rapier as winged horrors assail him from above. Nevertheless, he makes it back to the gates of Starkbrunn, unscathed, by dawn. Always thinking of first things first, he manages to secure a bottle of wine. Properly fortified, he makes his way to the Black Eagle to find Cordula.

When he gets to the pub, he finds that it is closed, it being early in the morning. He raps on the barred door and the small peep hole opens. "I need to see Cordula," he says. "It's urgent."

The door opens and the old barkeep in the soldier's jacket stands there staring at him. "You look like shit," he growls, but lets the Castillian in and takes him the back room where Cordula awaits.

Rico explains the situation to Cordula who tells him to rest there in the back room where there is a cot. She will gather reinforcements—it will take her most of the day to do so. They will prepare to return to the stronghold in the morning. Rico thanks her and curls up on the cot and goes to sleep.

Ysabel and Fenneke wait at the stronghold and discuss with the old man his ordeal at the hands of Yngvild. They discover that Yngvild discussed returning to a ship. She also mentioned having to answer to "The Señora." Could this be Yngvild's mysterious patron?

Also, Fenneke notices a patch of red hair on Ysabel that she has apparently neglected to dye. Very curious…

As they wait for Rico's return, Fenneke and Ysabel work about the stronghold, tidying up, working the forge, etc. They ask the Master about the Horrors striking the stronghold and he says that they used to, but that when it was strong they had scared them away—but now that there are no forces here, they may come back.

The Master of the Chamber offers to let Ysabel and Fenneke use the Chapel if they are so inclined, as it is a holy day. They both respectfully decline.

Fenneke approaches Ysabel and tells her that she "missed a spot," pointing to her hair. Ysabel is speechless. "It's a lovely shade of red. I won't say anything. I don't know what you're running from or why you don't like red hair or if you're Vesten, Avalonian, or from Innismore. I'll keep your secret." She leaves Ysabel with her mouth agape.

Later that day, around sundown, Rico arrives with 20 hired soldiers from Starkbrunn. The two ladies catch Rico up on current events and he takes a cold bath in the nearby river.

They discuss possible moles in the organization with the Master of the Chamber. The Master says that there is a limited pool of people that are aware of what is stored here in the stronghold—possibly only his superiors at the main Society chapterhouse in Lisso even know of the golem's existence. The thought that the conspiracy travels so high disturbs Rico, but he ponders the possibility of traveling to Lisso nevertheless. Finally the Heroes rest for the night and set out for San Cristóbal in the morning.

The Heroes finally arrive in San Cristóbal. They rode to the coast and, once again, took The Cordon Bleu to the capital.

Once they arrive, the three friends head to the home of the the Caballero Iñigo de Bonaval de Cristóbal. The Caballero welcomes the Heroes and bids them tell him of their adventure. As Rico tells the tale, pushing certain buttons to get reactions from the Caballero, testing the resolve of the gentleman to see if he is, indeed, their mole, Ysabel watches the gentle carefully to gage his reactions as well. Fenneke watches the surrounding guards and servants to see if they are on their guard and to judge their reactions to the tale.

Rico tells the Caballero about Yngvild and mentions only her desire for the device behind "door number one"—not what was there. He manages not to offend the gentleman and solicits a genuinely surprised response from him. He is surprised, appalled, and concerned about what transpired at the stronghold. He clearly believes Rico and does not know what is actually behind "door number one."

In trying to sort out who the mole may be, the Caballero proposes that there were only four others who knew the proper countersigns that could have passed them on to Yngvild:

After their conversation with the Caballero, the Heroes gather at their favorite wine-house, Esmerelda's, to plan.

Could The Señora Teresa Ramirez de Salazar de Cristóbal be "The Señora" mentioned by Yngvild? Could Yngvild been in the city that very night they were given this assignment? Fenneke did see some of her crew at the ball. And Rico met the Señora at the party. What are the relationships between each other? 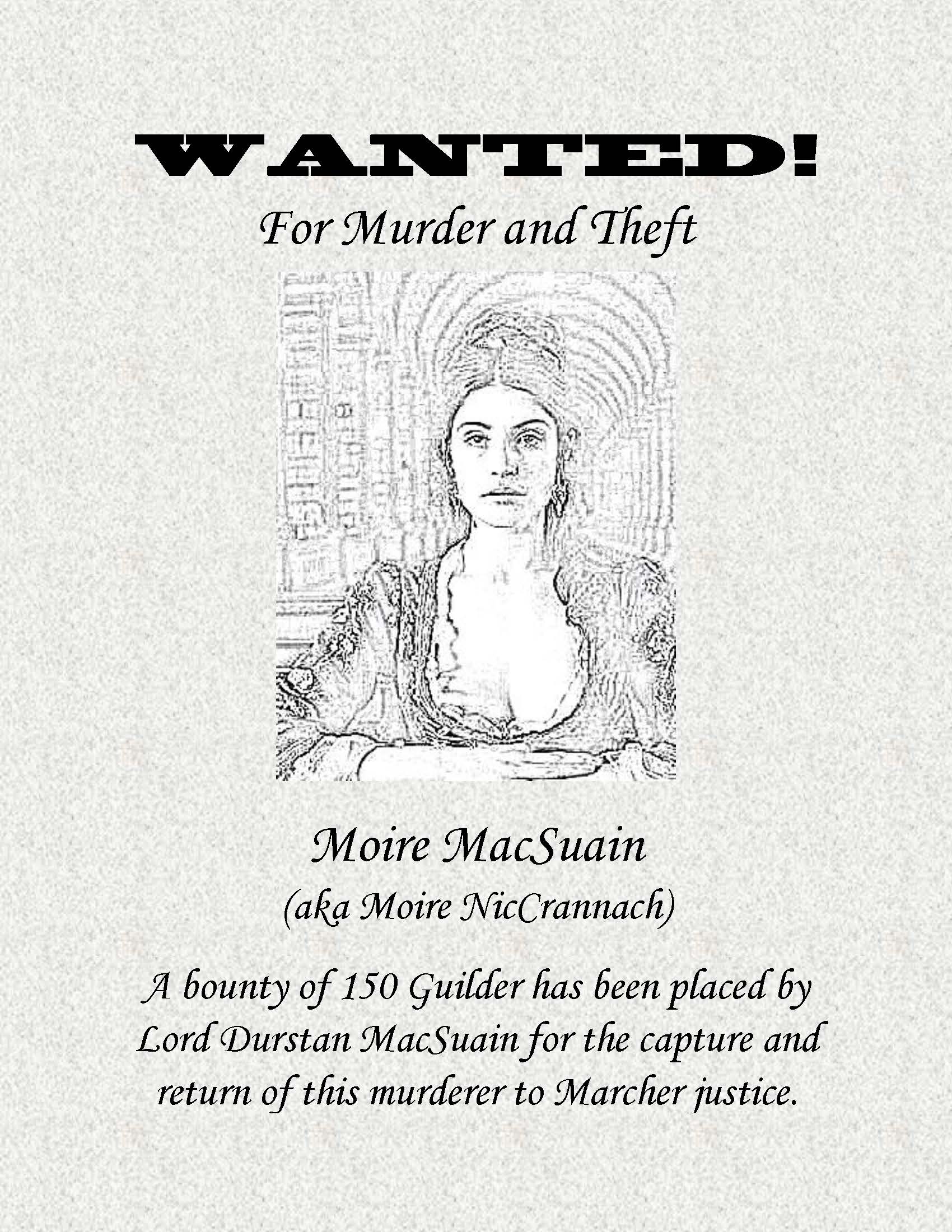 Fenneke decides to go along the docks and see if she can get some news of Yngvild. Rico accompanies her, flashing his duelist pin to buy her some coin in intimidation and local information. She learns that Yngvild's ship, The Blood Price (Blud Pris) has been seen far off the coast. The red-haired man, Aksen, has been seen on shore at the Red Strumpet Inn. The Athame has also been seen off the coast as well.

While on the docks with Fenneke, Rico spots something interesting—a wanted poster with a very familiar face:

After helping out Fenneke, Rico heads to the Society chapterhouse to learn more about the sorcerous dagger Yngvild had. He calls in a few of his favors and learns that it was last seen in Charouse, the capital of Montaigne, but was probably stolen on a raid there about a month ago. He also asks about whether the Señora is seen here. He is informed that most of her dealings with the chapterhouse are handled through Javier de Rioja.

Ysabel goes among the merchant folk for information on the Señora. She is a noblewoman of San Cristóbal, her family having lived her for several generations. She is known for her generosity and philanthropy. She is held in high regard. She is a widow, her husband having fallen during the War of the Cross.

The three meet back up at Esmerelda's to plan. After a brief discussion, they decide that the best course of action is to head to the Red Strumpet Inn and see what Aksen has to say…

The Strumpet and Phoenix Session Ten