Woman on the Run

Name True Love Never Dies
Goal To be re-united with her true love, Colin MacNeal
Reward Advantage: Reputation (Savvy) and Linguist
Step 1 To talk to the captain of the Blae Balderrie (The blue orchid)
Step 2 Travel to San Sancha to learn what happened to Colin
Step 3

Moire NicCrannah grew up in an old, but impoverished, noble house from the Highland Marches. Her family’s ancestral lands lay outside of the city of Connickmoor. Moire had a relatively uneventful childhood, spending much of her time with her best friend, Caitlin NicPhedair. As she grew older, Moire developed into an attractive young woman. She turned the heads of many a man, including that of a young sailor by the name of Colin MacNeal. Much to the dismay of her father, Moire returned his affections.

Her father refused to give his blessing to such a relationship. He began making private arrangements to marry her off to Lord Lachlann MacSuain, a wealthy noble who desired the pretty (and much younger) woman in order to have access to her ancestral lands. When Colin was off away at sea, Moire’s father announced that she would marry Lord MacSuain. Moire refused and spurned his advances again and again. Unbeknownst to many, Lord MacSuain was a brutal and possessive man. The fact that Moire would defy his will in this matter infuriated him. With his powerful connections, he spread false word that Colin’s ship had been lost in a powerful storm. All on board were reported as dead.

Heartsick and grieving, Moire finally gave in to the marriage demands of her father and Lord MacSuain. The two were married in a small, private ceremony. Once back at Lord MacSuain’s home, his true nature revealed itself. The brutal man took his fists to her, beating her nearly to unconsciousness. He then locked Moire in her chamber and cautioned her against defying his will ever again. She would be his forever. Broken and bleeding, the young woman became desperate. When Lord MacSuain came to her chamber that night, she murdered him with the dagger on his own belt. Moire stole away into the night, taking with her as much gold and wealth as she could carry.

Moire managed to convince a ship to allow her to buy secret passage with very few questions asked. Perhaps it was her haunted expression and battered face, but Captain John James Seymour decided to provide the young woman with the name of a contact in Castille who might be able to help her. When the Solemn Promise docked in San Juan, Moire sought out Alfonso de Escalona.

Alfonso was a talented fence in San Juan’s criminal underground. Moire worked with him to establish a completely new identity for herself. Gone was Moire NicCrannach. In her place was Ysobel de Sonseca de las Olas. Within a year, Ysobel moved to San Christobal and found work with a wealthy patron, Roberto de Jimenez de San Felipe. Ysobel is determined to become a successful business woman in her new life, further distancing herself from her past. However, no matter how much time has passed, she never stops grieving for her lost love … or looking over her shoulder in case her crimes ever catch up to her. 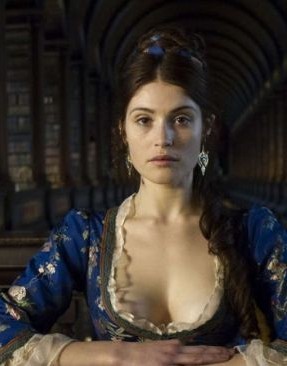